LÀB REPORT
From lizard to ostrich and python - exotic luxury handbags are much-coveted collector's pieces that tend to achieve sensational auction outcomes and elicit great demand on both, the primary and the secondary market. Learn more as SACLÀB Co-Founder Jan-Oliver Stueck shares his insights into the lavishly exclusive world of exotic Hermès, Chanel, and Dior handbags. We break down what you need to know before taking the plunge, and why the pre-loved market offers a smart and ethical purchase option. Text by Leonie Görke
Share

Arguably the most precious and costly leather on the market, crocodile is often referred to as the “king” among exotic skins. With its exquisite look and feel, handbags crafted from crocodile hide usually command the highest prices, in-store and pre-loved.

Hermès distinguishes between Porosus Crocodile, sourced mainly in Australia, and Niloticus Crocodile, originating in Zimbabwe. Porosus Crocodile is in fact the most valuable among Hermès’ exotic skins and available in a matte or shiny appearance, the so-called “Lisse” finish. Unlike an artificial coating or glazing, Hermès artisans skillfully buff and polish the crocodile hide with agate to create the glossy shine. Bought in store, a Birkin 30 Porosus Crocodile Hermès handbag costs around €44,000 and reliably scores prices above retail on the secondary market. Porosus Crocodile is mainly used for bigger sizes, starting with the Birkin 30, making smaller sizes especially rare and desirable. 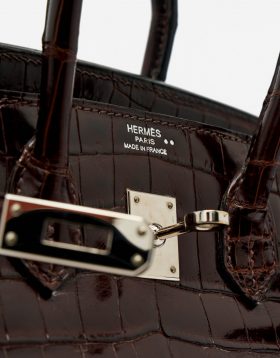 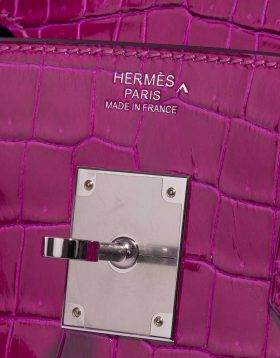 (1) Niloticus Crocodile can be identified through the “••” next to the Hermès stamp, whilst (2) Porosus Crocodile is marked by a “^”.

Another exotic favourite, Dior offers a range of models crafted from crocodile leather. With the large scales and elegant gloss, a crocodile leather Lady Dior is a particularly beautiful choice. However, Dior crocodile bags do not necessarily hold their value – retailing at around €8,000 to €20,000, they usually resell for half of their original price.

Luxury Crocodile Bags: What you need to know

Investing in an Hermès Crocodile Bag

The Hermès Birkin Niloticus Crocodile Himalaya is the most sought-after piece.

Kept in immaculate condition, Hermès crocodile bags resell well above their retail price. Make sure to keep all documentation (CITES), the invoice, accessories, and box to get the best return on the secondary market.

At first glance, alligator and crocodile skins are hard to tell apart. Both reptiles share a similar appearance, but alligator scales are slightly smaller and softer to touch. In contrast to alligator skin, crocodile scales show small pores, visible remains of the animal’s hair follicles – the easiest way to differentiate between them. 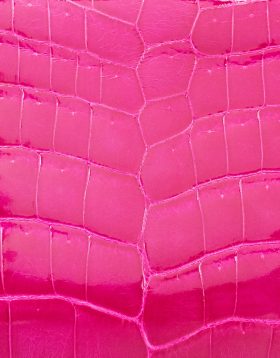 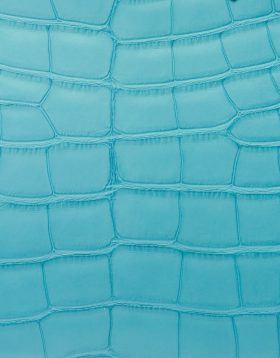 (1) Crocodile scales have small round pores near the edges, whereas (2) alligator scales are smooth and don’t show any pores.

Hermès works with Alligator Mississippiensis, a species sourced from US farms down the Mississippi river, to craft smaller bag sizes. The skin is a little less costly and used more often, as it is easier for Hermès to source than crocodile. If you purchase an alligator Hermès Birkin or Kelly bag, inspect the bag’s front: A line – the umbilical scar – should run more or less symmetrically down the middle, dividing the scales as they get smaller towards both sides. Generally, the more symmetrical the pattern of the scales, the higher the value of the bag. 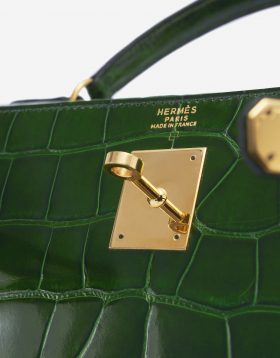 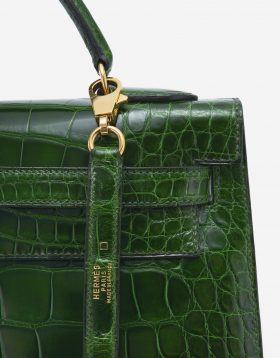 Alligator leather is marked by a little square (1) underneath or (2) next to the Hermès stamp.

A very rare collector’s item, the Birkin 20 Faubourg is handcrafted from matte alligator hide in Beton and created as an hommage to the Parisian Hermès flagship store in 24 rue du Faubourg Saint-Honoré. “Per colourway, merely an estimated 100 to 150 pieces exist of this rare handbag,” explains Jan-Oliver. The collector’s item was sourced by SACLÀB and sold for €265,000 – one of the most exceptional and valuable pieces that have crossed our studio so far.

Among pre-owned Chanel bags, alligator is the most valuable exotic skin. As the French couturier discontinued working with exotics in 2018, due to the company’s struggle to ethically source skins, exotic creations are solely available on the resale market. Since the ban, Chanel has released crocodile- and alligator-embossed look-a-like leather editions, for instance as part of the Ancient Egypt-inspired 2018/2019 Paris-New York Métiers d’art show.

If you consider buying a pre-loved Chanel Timeless Classic or 2.55 Reissue bag made from alligator, look for vibrant colours. Chanel alligator bags come in bright fuchsia, electric blue, or fire red – shades that look impeccable in combination with the glossy, smooth surface. With an original price tag up to €40,000, chances are good to snap one up for a third or half. Alternatively, keep an eye on vintage alligator Chanel bags in more neutral colours at a lower price point, and have them refurbished at a bag spa if necessary. Learn more about the house’s array of leathers in our Guide to Chanel Leathers and Materials.

Alligator Handbags: What you need to know

Investing in an Alligator Luxury Handbag

Kept in immaculate condition, Hermès alligator bags resell well above their retail price. Make sure to keep all documentation (CITES), the invoice, accessories, and box to get the best return on the secondary market.

Lizard skin is very sought-after and rare, even in the exotics sphere. The tiny, round scales and glossy surface make it a popular choice for evening bags and smaller sizes. Lizard is extremely delicate and high in maintenance, as it tends to dry out, peel, or break without proper care.

Hermès bags are made from Lizard Niloticus, originating from the Nile river, or Varanus Salvator Lizard. The scales absorb dye very well and are often released in bright and intense shades. “Lizard is only used for bags sized up to 25 at Hermès, as the scales are very small and refined. Compared to a matte finish, we see a higher demand for Hermès lizard bags with a shiny appearance”, Jan-Oliver explains.

The equivalent to the Hermès Birkin Crocodile Niloticus Himalaya, a Birkin 25, Kelly 25, or Constance Mini in Lizard Ombre is a once-in-a-lifetime collector’s item. It is crafted from a single lizard hide, and features a symmetrical colour gradient and remarkable craftsmanship. Each year, only very few are manufactured and sold by Hermès, resulting in great demand and high prices on the secondary market.

Chanel lizard bags are extremely rare. It’s worth keeping an eye out for vintage items from the late ‘80s and ‘90s, especially if you are shopping on a budget. Faded colours can be refreshed at a bag spa, reviving the bag’s original gloss.

For Dior, the Lady Dior or Diorama are classic choices to invest in. Raf Simons’ lizard designs – from Fall 2015 for example – feature impeccable bright colours and ombre-like shades. Similarly to Chanel, these are a budget-friendly option on the resale market with a price tag starting at €1,500 to €2,000.

Luxury Lizard Bags: What you need to know

Unlike Chanel and Dior, Hermès lizard bags hold up their value very well. Make sure to keep all documentation (CITES), the invoice, accessories, and box to get the best return on the secondary market.

Python is among the most delicate and sensitive exotics. The snakeskin is especially susceptible to colour transfer, flaking and drying, and requires an expert touch-up every once in a while. If python scales start curling up, your bag urgently needs professional nourishment. “Despite its sensitivity, python does not break as quickly as lizard skin. Your bag might, however, lose scattered scales over time,” Jan-Oliver says. 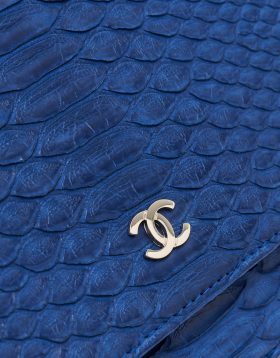 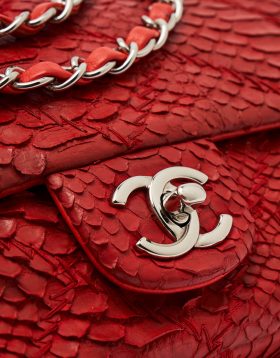 Python is a lightweight, extremely delicate skin, and very popular among Chanel collectors.

Python is a particularly popular choice in vibrant colours, as the scales take on dye very well – think fuchsia, turquoise, and scarlet red. Pre-owned Chanel bags crafted from python are much-coveted collector’s pieces and usually price around €2,000 to €4,000. The highest in desirability and price are So Black Chanel python bags with matching all-black hardware.

Dior usually works with Ayers snakeskin, which shows slightly smaller, diamond-shaped scales. It is similarly fragile to python, but usually a bit lower in price. Featuring captivating gradient colours, the revived Dior Saddle made from Ayers snakeskin is a contemporary option.

Python and Snakeskin Bags: What you need to know

Snakeskin bags usually don’t hold their retail value and can be snapped up on the resale market for half or less of their original price. Make sure to keep all documentation (CITES), the invoice, accessories, and box to get the best return on the secondary market.

Ostrich is the most durable exotic skin, and much-admired for the character and patina it develops over time. However, ostrich is prone to discolouration, and bag handles usually darken in contact with skin. Ostrich is also rather difficult to clean and stains can leave permanent damage. 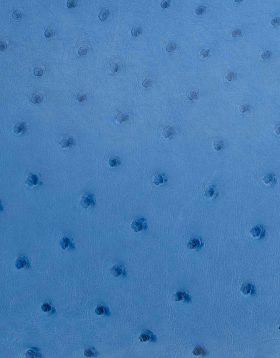 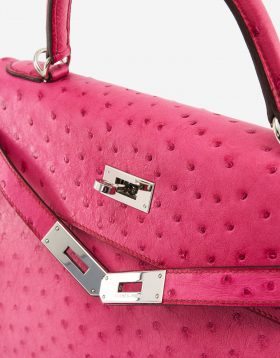 Ostrich leather is especially durable and the quill pattern, colour, and size determine a bag’s price.

Originating in South Africa, Hermès classics handcrafted from ostrich are made to last. The many visible and closely centred feather follicles, the so-called quill pattern, signal the leather’s quality and worth. “In contrast to Crocodile Porosus or other Hermès exotics, the demand for ostrich leather is fluctuating. Rare, bright colours and small sizes currently generate the highest resale value,” Oliver adds. Some colours are exclusively used to dye ostrich leather, like Hermès Violine or Tangerine. Hermès ostrich bags are not marked by a specific foil symbol next to the logo stamp.

Similarly to Hermès, you should consider the colour when opting for a Dior ostrich bag – light, intense shades accentuate the pebbled surface best. For vintage lovers, a 2001 Dior Saddle created by John Galliano in thick ostrich leather can be found on the secondary market for €1,000 to €2,000. The Dior Lady offers another popular choice but often comes with a higher price tag.

Chanel ostrich bags are rather rare, but some well-aged vintage editions can be found on the secondary market – the Chanel Camera design from the mid-’80s for instance, available for less than €1,000. More expensive and relatively scarce is a 1980s Chanel Timeless Flap bag crafted from ostrich, often sold for more than €6,000.

Luxury Ostrich Handbags: What you need to know

Hermès ostrich bags usually don’t sell significantly above their retail price. Make sure to keep all documentation (CITES), the invoice, accessories, and box to get the best return on the secondary market.

If you’re on the hunt for an exotic Hermès, Chanel, or Dior bag, shopping pre-loved has numerous upsides. Firstly, these items are re-introduced into the high-end market and thus contribute to a circular economy of luxury fashion – with special attention to their exotic origin. Secondly, you can get your hands on vintage treasures, ultra-rare special-orders, and limited editions from previous collections that are no longer available. And thirdly, no long-standing purchase history is necessary to be offered an exotic handbag. Instead, you can invest in your dream bag on the spot with SACLÀB, and have it delivered to your doorstep within 3 to 5 business days.

Which exotic handbag is on your wishlist? Browse our curated selection of pre-owned Hermès bags to find the crown jewel for your collection.