The Luxe Array of Hermès Leathers

SACLÀB ICONS
You’ve made the thrilling decision to purchase an Hermès bag – but did you know that there’s more to consider than just whether you’ll go for a Birkin, Kelly or Constance? When it comes to Hermès, materials matter. The fashion house’s library of leathers is vast, with each variety having its own distinct characteristics. Grouped into three categories – smooth, grained and exotic – find out which suits your lifestyle and budget with expertise from our resident Hermès authority, SACLÀB co-founder Oliver Stueck. Suzannah Wilkinson
Share

Smooth, supple leathers, often with a glossy sheen, are prized by Hermès collectors for their fine-grained beauty and vintage personality. As a general rule of thumb, these skins can be delicate and susceptible to scratches and watermarks, so think carefully about how you’ll be using your bag.

Box Calf leather is the original skin in the Hermès leather library. Often found on vintage Kellys, it is beautifully glossy, holds its shape well and absorbs colour vibrantly. It’s rare to see this material in Hermès boutiques nowadays, as it has been replaced by the Swift leather (once called Gulliver). To note, both Box and Swift leathers can be easy to scratch because of their silky smoothness, and are not water resistant. Because of this, you’ll find that Swift leather bags can be a little lower in price than more practical grained leathers. If you prefer a matte finish, look out for Chamonix – a less shiny equivalent to Box Calf and Swift which is scratch resistant, but similarly should not be carried outside on rainy days. 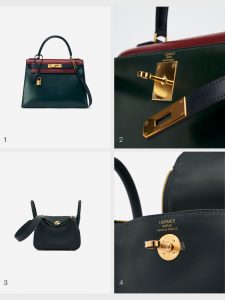 Barenia leather is the most expensive smooth leather found in Hermès workshops. Once used by the house for saddle making, it’s treasured as a sturdy heritage skin that’s also incredibly soft to touch. Desirably, it does not scratch easily, and is also water resistant. Mainly left in its natural golden caramel colour, you’ll find it paired with white stitching for a fresh yet timeless look. Due to its oil-absorbing qualities, over the years Barenia will develop a natural patina – it’s own personal history – in places where it is most often handled. This is a quality that Barenia is celebrated for by Hermès aficionados. In recent years, Hermès has released a variation, Barenia Faubourg, which encompasses many of the classic Barenia qualities, but in a more hardwearing grained finish. A newer smooth leather to look out for is the Veau Jonathan, a calf leather reminiscent of both Swift and Barenia, but in a contemporary matte finish and with a stiffer structure.

If you want your Hermès bag to look ‘like new’ for years to come (and retain its value on the secondary market), a grained leather could be your way forward. These skins are scratch resistant, with varying grades of sturdiness, meaning they will stand up on their own, and many don’t need to be stuffed to retain their shape in storage. Make sure you look after the corners of your grained-leather bag, as they can be prone to wearing.

Togo leather is the most famous of the grained leathers, with about half of all Birkins made using this material. A baby calfskin, it has a fine pebbled appearance, holds its shape well and is very matte – although it will become a little shinier over time. Clemence, in comparison, is a heavier, softer leather – it will need stuffing, and gives bags a ‘slouchier’, informal appearance. It is scratch-resistant, but liable to stain in the rain. 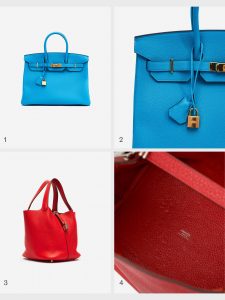 (1&2) The Togo leather, as in this Hermès Birkin 35 Bleu du Nord, has a finer grain as this (3&4) Clemence Picotin, which is a lot more ‘relaxed’ in style

Epsom leather is structured and stiff. It’s a lightweight embossed leather, so doesn’t show a natural grain, and is completely scratch- and water-resistant, making it very durable – ideal for your everyday bag. 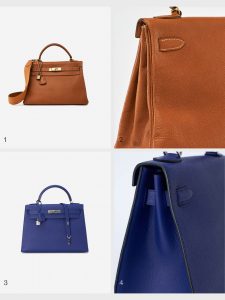 Epsom leather is used in endless forms and shapes (1&2) Show a Hermès Kelly 32 in retourne from Epsom, (3&4) how a Kelly 32 in sellier Epsom

A favourite grained leather of SACLÀB co-founder Oliver Stueck is Chèvre Mysore, a goat leather found on smaller items such as the Kelly 20 and 25. Hermès often uses this leather to line its bags, demonstrating how long-lasting it is. Oliver admires it for its natural character, fine grain and luxurious finish. Chèvre de Coromandel is an alternative to Mysore, with a slightly larger grain. Loved for their refined toughness, these Hermès goat leathers are generally more expensive than calf. 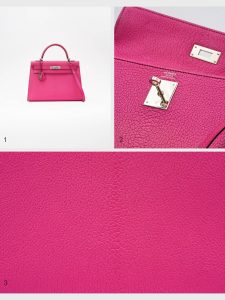 Chevre Mysore, Mysore being a city in southwest India, is a rare and sought after leather found in Hermès bags (1,2,3) Show a Kelly 25 in Rose Shocking made from Chevre Mysore

For a truly special purchase, look to Hermès’ line-up of exotic skins. As a standard, exotic skins are more expensive than smooth and grained leathers, with Ostrich being the entry-level price. Playfully polka-dotted with raised pores, ostrich leather is delightful to look at, and is extremely durable. To note, it does absorb oil from handling, and can change in tone over time through exposure to light, giving it a unique patina. Advantageously, it does not require a CITES certification to travel, unlike other exotic skins. 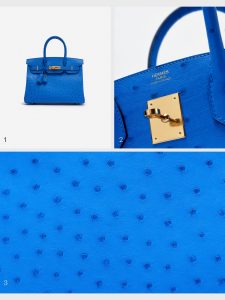 A Hermès Birkin 30 in Bleuet made from Ostrich leather

Varanus Niloticus and Salvator Lizard are next in line in terms of expense. Marked by a stamp of one or two lines next to the Hermès logo, these exquisite, rare lizard leathers are often used for smaller bags, such as the Kelly 20 and Pochette, to ensure that the pattern of the skin can remain consistent across the bag. A particularly coveted variety is Hermès’ ombre lizard leather, which celebrates the natural qualities of the skin in a dazzling motif. The minute scales of lizard leather are delicate and can dry out, so a bag should be looked after carefully, with regular treatment. 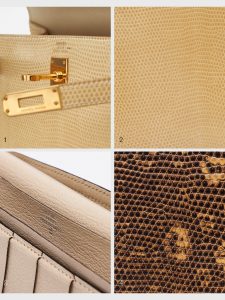 (1&2) A Hermès Kelly Mini made in Lizard, marked with one stripe (3&4) A Lizard Ombre wallet, marked with 2 stripes on the inside

Hermès’ crocodile and alligator skins have hit headlines in recent years due to the record-breaking auction success of the house’s Himalaya bag. It’s easy to understand why these leathers are so collectible – the exotic glamour of the scales, combined with the skill of Hermès artisans in achieving perfect symmetry when crafting bags with them, is hugely impressive.

Mississippi Alligator is the least expensive of this category, marked by a square stamp next to the logo. It has more pronounced scales, with rougher ridging, and is very durable. 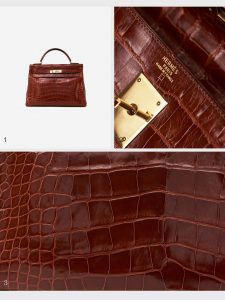 A rare Hermès Kelly 32 in Etrusque made from Alligator

Compared to this, Niloticus, the most common crocodile skin used by Hermès, has larger, smoother scales. Sourced from crocodiles from the Nile river, famously it is used for the aforementioned record-breaking Himalaya Birkin, and can be identified by two dots next to the logo. 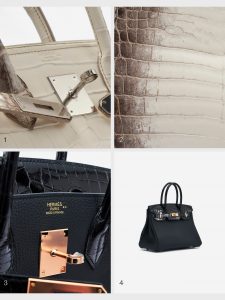 Finally, the Porosus crocodile is the most expensive Hermès exotic leather available. Look for a ^ symbol next to the logo, a pronounced pore on each scale, and a fine, symmetrical pattern. 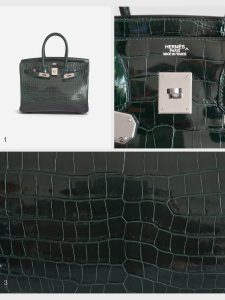 Both lizard and crocodile/alligator skins are available in matte and shiny finishes, although to note, shiny finishes are very sensitive to watermarks. Oliver recommends that exotic-skinned bags should be treated to a spa service every 2–3 years, as the skin between the scales is thin and can break if not cared for properly.

Whichever leather you choose to embrace, remember that with a little love, your Hermès bag will stand the test of time for years to come. SACLÀB offers a complimentary spa service with any bag purchase, and can give bespoke advice depending on the material. If you’ve got your heart set on a particular leather, get in touch with one of our advisors or browse curated pre-owned Hermès bags.