Home Journal The Story of the Hermès Kelly

The Story of the Hermès Kelly

SACLÀB ICONS
A long-revered style from the Hermès atelier, the Kelly is the epitome of ladylike elegance. Sleek, chic and offered in an array of beguiling variations, it ranks as a perennial SACLÀB favourite. Text by Suzannah Wilkinson
Share

The story of the Kelly bag began long before it assumed its now-famous moniker. Originally known as the Sac à Dépêches, it was designed in 1930 by Hermès CEO Robert Dumas as a refined take on the larger saddle bags of the brand’s equestrian heritage. A clean-cut trapezium shape with practical straps, its design was as discreet as it was chic – something which whispered luxury, rather than shouted it.

Dumas’ Sac à Dépêches was a popular style for the brand, but it wasn’t until 25 years later that its true star potential was realised. Whilst working on the Hitchcock classic To Catch a Thief in 1954, the actress Grace Kelly was given a Sac à Dépêches to wear as part of her character’s wardrobe. Grace loved the bag so much that, once the film wrapped, she continued to carry it with her off set. It was one of the last films she would make – two years later, at the age of 26, Grace made the historic move from Hollywood ingénue to Princess of Monaco during a fairytale wedding to Prince Rainier III, watched on live television by over 30 million people. After their nuptials, newly pregnant with her first daughter, Grace turned to her trusted Sac à Dépêches to help shield her growing baby bump from the waiting paparazzi. With Grace looking typically glamorous in a sumptuous coat, white gloves and sunglasses, the image appeared in magazines around the world – and the newly crowned ‘Kelly’ bag was thrust into the spotlight with it. A longtime nickname for the bag ever since, Hermès officially renamed the Sac à Dépêches as the Kelly in 1977. 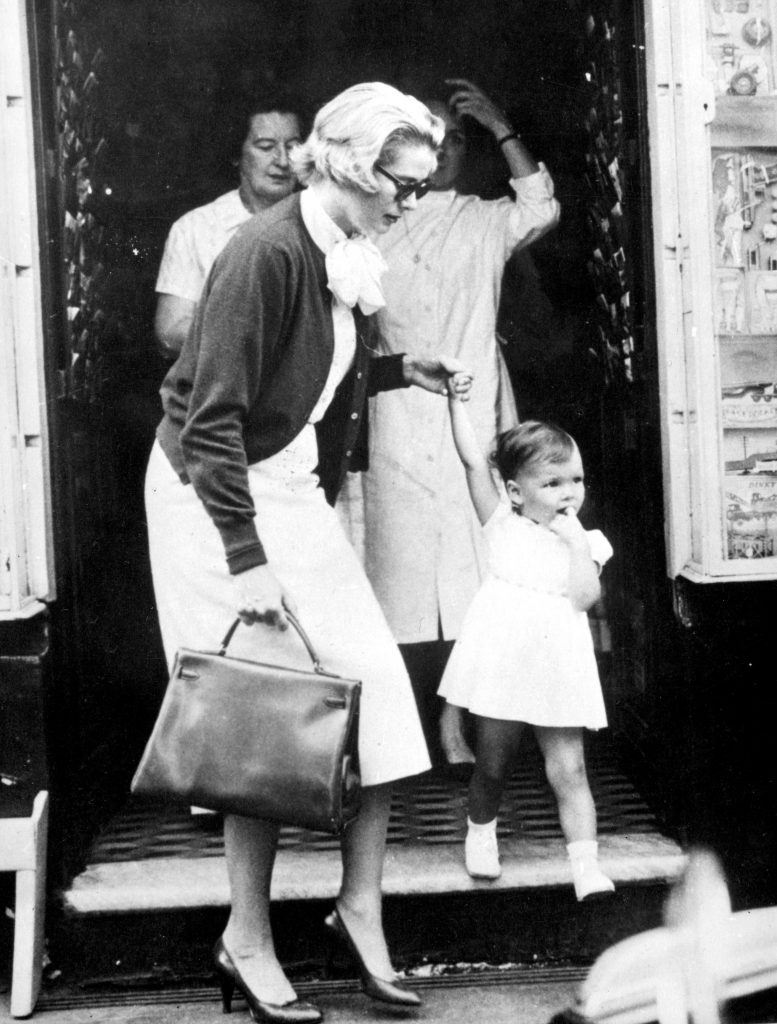 Princess Grace holds the hand of her daughter, Princess Caroline, and her Kelly Bag in the Avenue des Moulins in Monte Carlo. Image: Alamy 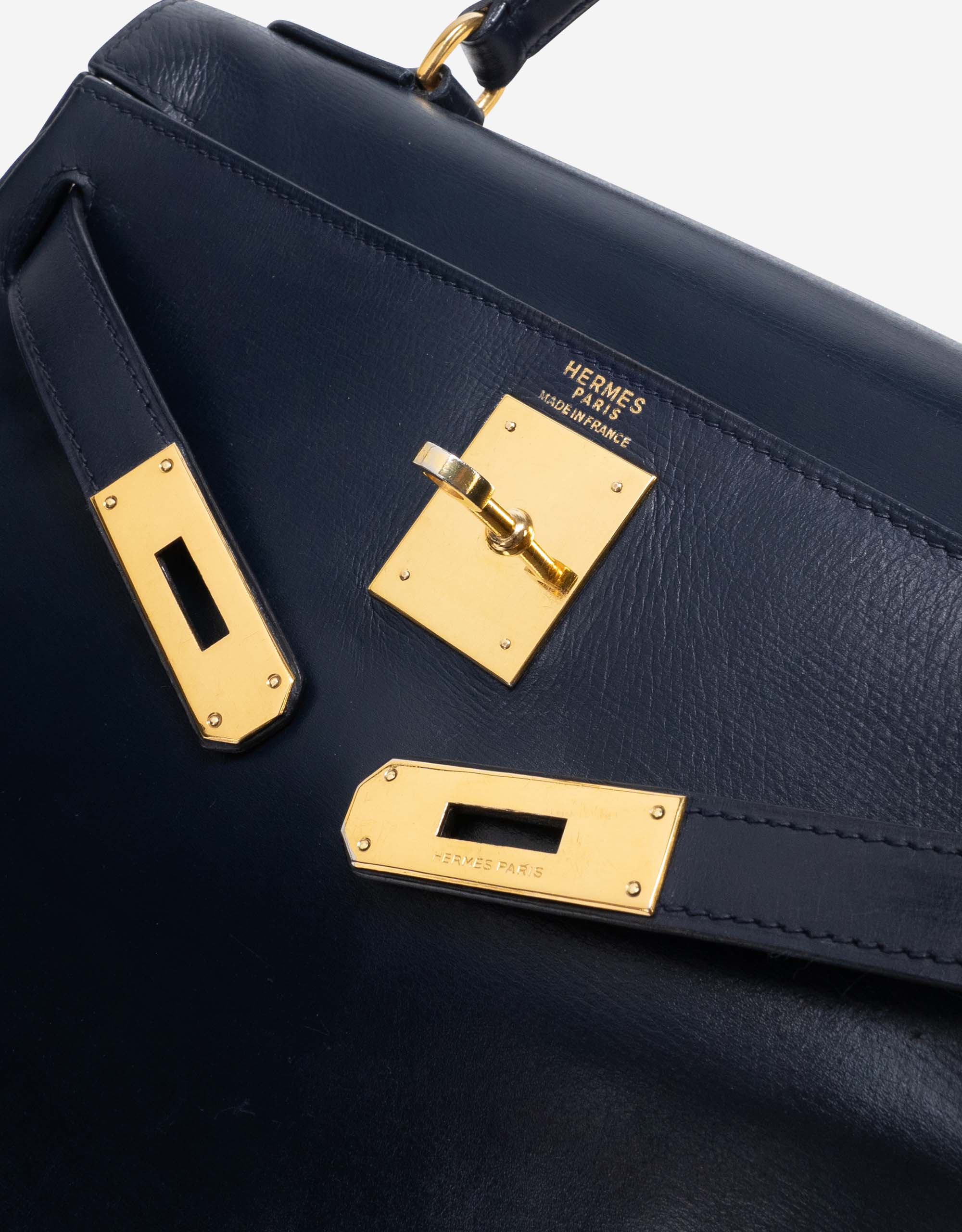 Typically for Hermès, the construction of the KELLY is a thing of astonishing perfection. Each bag takes an Hermès artisan around 18 to 20 hours to complete from start to finish (no assembly lines here), with 680 stitches securing 36 separate pieces of leather. For an extra flourish, a maker will sometimes even iron the bag to ensure a smooth surface, before it is carefully inspected for any faults.

When purchasing a classic Kelly, your first decision should be choosing which version you would prefer – a SELLIER, or a RETOURNE. The Retourne, the original Kelly design, is sewn backwards and then turned inside out like a glove, resulting in a softer, more informal finish. The Sellier, by comparison, is more rigid and architectural, with sharp edges and stitching on the outside. There are eight different sizes to pick from, with the most common being K28, K32 and K35. From there, you’ll have the pleasure of browsing a plethora of different materials and colours – from classic Black Epsom to Bleu Saphir Ostrich. Decisions, decisions!

Hermès has also introduced a number of different variations on the classic Kelly, including the Kelly Lakis, with a zippered exterior pocket, the Kelly Longue and Kelly Cut clutches, and the Kelly Shoulder.

Any Kelly bag is special – but a special order Kelly is something else. Each year, Hermès allows a select number of lucky clients to design their own bespoke Kelly, using a predetermined seasonal range of colours, fabric and hardware. This includes the option of having two colours, as well as the possibility of a longer strap length, or contrast stitching. If you find a Kelly with an Hermès horseshoe stamp inside it, this means it was custom-made as a special order, making it especially rare and valuable – a collector’s item to invest in.

Over the years, Hermès has continued to reinvent the Kelly and release limited-edition models – all as delightfully ingenious and playful as the brand itself. The Osier Picnic Kelly is braided from a whole strand of wicker as a twist on a traditional picnic basket, whilst the Idole Kelly comes complete with a characterful cartoon face. SACLÀB’s co-founder and Managing Director Oliver Stueck particularly prizes the Feather Kelly – an extremely rare model made only for a window display in 2011, adorned with real feathers.

Why it’s worth investing

Whilst the HERMÈS BIRKIN has gained notoriety in terms of the record prices it has achieved at auction, it’s worth noting that a Kelly makes for just as shrewd an investment. The TELEGRAPH REPORTED that the popularity of the Kelly has soared in recent years – prices are up 350% in the last decade, with more Kellys being sold at auction now than Birkins. One of the most expensive Kellys ever to come to auction was the Kelly Geranium Porosus bag – a one-of-a-kind creation made with matte crocodile and Togo leather, unusually crafted with five feet, which sold for US$125,000 in 2013.

Historically, iconic Hermès bags such as the Kelly have been found to be a better investment than the stock market, due to how reliably they retain their value. However, as always, it pays to look after your purchase – from ensuring that you keep the dust bag and any accessories, to occasionally treating it to a SACLÀB SPA BREAK to keep the quality of its leather and hardware as immaculate as when you first unboxed it.

Explore SACLÀB’s current selection of Kelly Bags HERE or WhatsApp our consultants on +49(0)15167850621 to discuss your requirements.