Behind the Birkin: The story of the Hermès icon | SACLÀB

Home Journal Behind the Birkin

SACLÀB ICONS
Collectable and covetable in equal measure, the Hermès Birkin is SACLÀB’s bestselling handbag. Here’s everything you need to know about this accessories icon. Text by Susannah Wilkinson
Share

A flight of fancy

Like many of life’s best ideas, the inspiration for the world’s most iconic handbag arrived in a moment of pure serendipity.

In 1981, English singer and actor Jane Birkin was upgraded on an Air France flight to London – and, laden with an overstuffed handbag, took her seat next to Jean-Louis Dumas, the then chief executive of Hermès. Dumas struck up a conversation with Birkin, who lamented to him that she couldn’t find a bag spacious enough to carry her young daughter’s bottles. The duo began dreaming up the perfect design mid-air, with Birkin even sketching it out on an airplane sickbag, proposing, ‘Why don’t you make a handbag that is bigger than the Kelly but smaller than Serge’s suitcase?’

Later, when Birkin visited the Hermès atelier to see the result of their flight of fancy, Dumas gave her the finished bag in return for her lending her name to it – and so the Birkin was born.

The design is in the detail

Dumas’ new bag fit the brief – the Birkin was capacious, crafted in supple black leather with Hermès’ signature saddle stitching, with a buckled flap top and gleaming swivel clasp, which could be secured further with a clochette-clad key and padlock. Inside, it had a large zippered pocket and an open pocket. 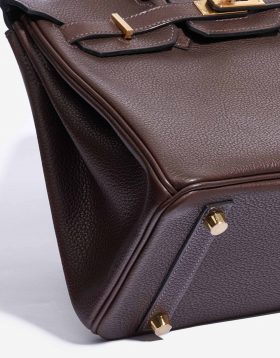 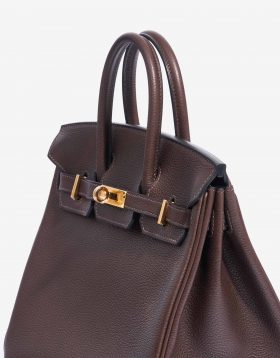 An instant hit, this original design has endured ever since, cloaked in a dazzling array of different colours and materials. At SACLÀB, all of our Birkin bags have gone through a rigorous authentication process, finessed over 10 years within the industry, so you can be assured you are purchasing a genuine Hermès creation – all you have to decide is your preferred shade and size. Whilst the first Birkin measured a generous 40 centimetres wide (now known as the ‘travel Birkin’), Hermès has since released new sizes, the most popular being 25, 30 and 35 centimetres. The clue is in the name: a Birkin 30 bag is, for example, 30 centimetres wide.

Hermès is, above all else, a house of pure, unfettered craftsmanship. As other companies increasingly invest in the digital realm and mechanize production methods, Hermès remains uniquely committed to keeping the artisanal alive – training 200 new craftspeople each year in their workshops in France in the heritage skills championed by the house since its foundation in 1837.

For Hermès, perfection is not a pursuit: it is an absolute. For this reason, the Birkin bag is an object of desire not simply because of the legendary waiting lists, but because it is a work of art. Each Birkin is handmade from start to finish by a single artisan trained for a minimum of five years, taking up to 40 hours and using traditional tools and techniques dating back to the Middle Ages. It’s such a personal process, you’ll find the artisan’s identifying stamp next to the date stamp in a Birkin, and if you send your bag for repair, Hermès will reunite it with its original creator for mending. 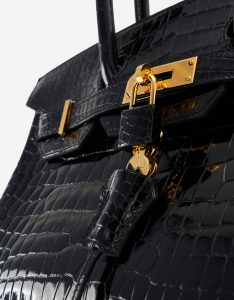 The house even maintains a Sur-mesure atelier, where clients can, just like Jane Birkin did all those years ago, see their dream Hermès design become a reality – be that a private jet, or a picnic basket.

For a unique twist, some owners opt to customise their Birkin. Jane Birkin herself commented, ‘I always put on stickers and beads and worry beads […] I hang things on my bags because I don’t like them looking like everyone else’s’. A colourful Hermès Twilly wrapped around a handle adds enough personal charm for some, but others go even further – Kim Kardashian owns a Birkin hand-painted by the lauded contemporary artist George Condo, whilst graffiti star Alec Monopoly is another popular choice for personalisation. 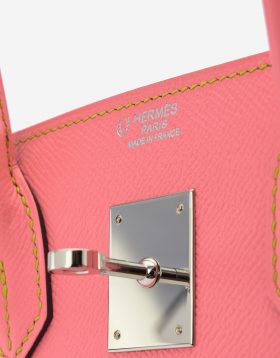 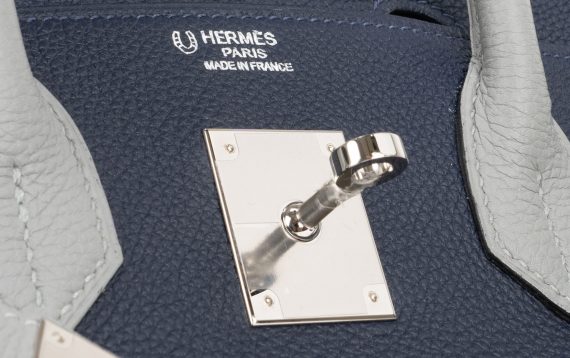 It was a Birkin, exquisitely crafted in snow-white Nile crocodile skin and with diamond-encrusted white gold hardware, that set the current world auction record price for a handbag in 2018 when it sold for an astonishing £236,750. Appropriately named the Himalaya Birkin, these one-of-a-kind pieces are part of a series of extremely limited-edition ‘Exceptional’ styles that Hermès has released which continue to soar in value at auction. Birkins with exotic skins, rare colourways (Rose Confetti, Rose Sakura, Bleu Saphir and Rouge H, to name but a few) and unusual hardware are also all highly prized by collectors.

However, even a classic Birkin bag will increase in value over time, if cared for correctly. Reports on rates of return vary, with some suggesting the Birkin offers better prospects than gold, but suffice to say, the Birkin truly is the ultimate investment piece. Find out how to keep your bag in immaculate condition with SACLÀB’S ONLINE GUIDE, or if it needs a little more TLC, contact us for more information on our in-house spa service.

Looking to score your first-ever Birkin Bag? Read our First-Time Purchase Guide before taking the plunge.